Brickman on The Block!

Last night our very own Brickman made a surprise appearance on The Block beside host Scott Cam! He even stirred up a little host rivalry by calling up Hamish Blake from LEGO Masters on his iPad. (For the record though Brickman still reckons Hamish is the better host *wink*)

As part of a special LEGO challenge set by co-host Shelley Craft Ryan’s job was to judge the 5 contestant team’s LEGO “Dream Home” Builds. Not only would the win give them a much needed $10,000 boost to their renovation budget as well as a home automation system, the winners would also take home a very special custom LEGO brick “+1” Gnome that they could use to help them win future room judgings.

The teams then set about building their LEGO built dream homes, but despite needing quite a bit of coaching they all finished their builds. Check them out below:

Despite having an advantage in the form of their LEGO Masters obsessed kids, SA farmers Daniel and Jade’s dream home didn’t score them the win. Still, Brickman couldn’t resist giving them a selfie to show their kids! 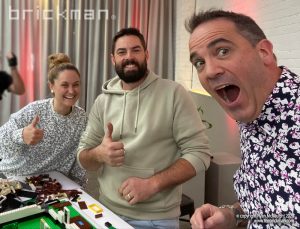 In the end Brickman awarded the win to Jimmy and Tam’s very inventive use of Technic to create the distinctive lines of their barn roof , as well as some NPU to create little brick-built farm animals.

Scott Cam then brought a little bit of LEGO Masters action to the challenge by smashing the losing team’s models with a sledgehammer!

Watch the trailer for the episode here:

and the full videos of their builds here: