Well folks, Brickworld has been and gone, I’m back from the good old US of A

I have to say it was an amazing show, so many great models, so many great people, I had a real blast, also a huge thanks to my mum and father in law; Alan who helped me! Couldn’t have done it without you both, and of course Qantas for getting me over there!

So now where do I start … well I think this picture explains a lot: 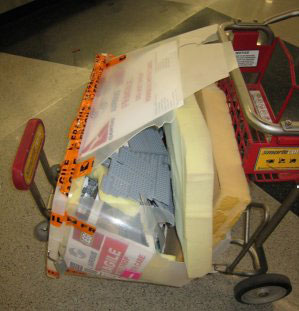 Yes the good people (yeah right!) at American Airlines totally destroyed one of the boxes from the airbus, as you can see they sure gave it a working over. (over 3,000 pieces missing) – it was clearly my fault for marking it “fragile!”

So after several long days and nights, and calls & favours with people for parts, the plane was able to be re-assembled.

Brickworld itself went very well,  with just over 800 exhibitors building some of the most amazing creations it was an amazing event, they do an academy awards style competition with the top 4 exhibits in the running for the grand prize, which I was lucky enough to be one of the four nominated! I didn’t win, but felt very honoured to have at least made it in the top 4, and it has inspired me to do better next year! 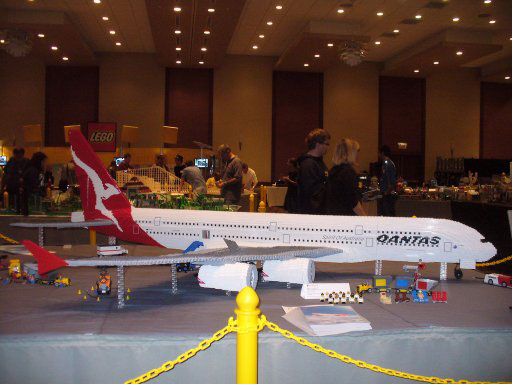 They had over ten thousand people come through on the public days, an amazing experience, and as Qantas had sponsored me I had a box of A380 brochures which people could take, they all disappeared very quickly and I had a constant stream of people over the public days tell me they always wanted to go to Australia, and everyone was very impressed by the flying kangaroo. I even had a couple from Canada who were booking their flights to Australia, and decided to change it to fly on Qantas so they could fly on the A380.

Watching the jaws drop of both children and parents alike when seeing the Qantas A380 is a great feeling. Having the touch screen active which allows everyone to control different functions on the plane made it even more special; watching a 5 year old fly a plane was very special and made the model even more fun.

Along with Australia’s Lego show in Melbourne in January – Brickvention, I’ve been invited back for next years Brickworld, and all going well I’ll be making another large model, this time the ship from the 80’s classic TV show, the love boat!   How I’ll get it over to the USA, well that is another question……..